Millions of Ebola vaccine doses by end of 2015, WHO says

Millions of doses of experimental Ebola vaccines will be produced by the end of 2015, the World Health Organization has announced.

It said “several hundred thousand” would be produced in the first half of the year.

And vaccines could be offered to health workers on the frontline in West Africa as soon as December 2014.

However, the WHO cautioned that vaccines would not be a “magic bullet” for ending the outbreak.

There is no proven cure or vaccine for Ebola.

In response to the largest epidemic of the disease in history, the WHO is accelerating the process of vaccine development

It normally takes years to produce and test a vaccine, but drug manufacturers are now working on a scale of weeks.

Two experimental vaccines, produced by GlaxoSmithKline (GSK) and the Public Health Agency of Canada, are already in safety trials.

The GSK vaccine is being tested in Mali, the UK and the US. Research on the Canadian vaccine is also under way in the US with further trials expected to start in Europe and Africa soon.

The results are expected in December. After that, trials will move to countries affected by Ebola, probably starting with Liberia.

That will allow researchers to assess how effective the vaccine is and what dose is needed to provide protection. 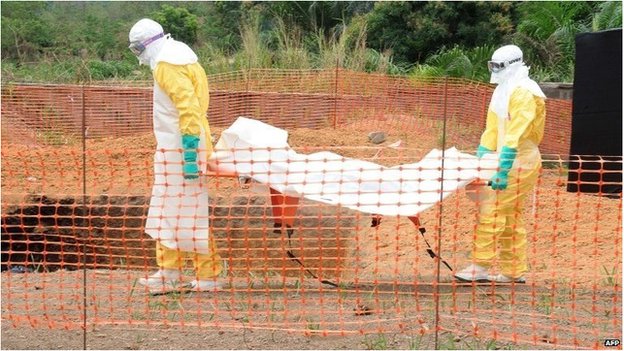 Volunteers on the frontline of the epidemic will be vaccinated first

Healthcare workers, who place themselves at risk when treating patients, will take part in the first trials in West Africa.

The WHO says we should have the first hints of how effective these experimental vaccines are by April.

There are no plans for mass vaccination before June 2015 but the WHO has not ruled it out.

The WHO says vaccines are likely to be key to ending the outbreak, even if cases fall in the next few months.

Dr Marie Paule Kieny, a WHO assistant director-general, said: “While we hope that the massive response, which has been put in place will have an impact on the epidemic, it is still prudent to prepare to have as much vaccine available as possible if they are proven effective.

“If the massive effort in response is not sufficient, then vaccine would be a very important tool.

“And even if the epidemic would be already receding by the time we have vaccine available, the modelling seems to say vaccine may still have an impact on controlling the epidemic.”

The vaccine plan was the culmination of a day of talks at the WHO in Geneva.

As well as the two vaccines already in trials, there are a further five in the pipeline which could yet play a role in the outbreak.

The World Bank and the charity Medecins Sans Frontieres will help finance the vaccine.