The H7N9 bird flu that emerged on the mainland in March may be spreading through human faeces, as university researchers found the virus in the stools of four out of six people killed by the bug in Zhejiang .

Theoretically, the virus could spread in the same way as severe acute respiratory syndrome (Sars) did during the 2003 outbreak in Amoy Gardens, Kowloon Bay – through sewage pipes – University of Hong Kong microbiologist Yuen Kwok-yung, a top researcher behind the cross-border study, told the South China Morning Post.

“This has important implications on the infection control strategies for H7N9 virus infection, as the influenza virus in stools may contaminate the surrounding environment,” Yuen and his team reported.

But the team also suggested that the fact the virus may be transmitted via faeces was the reason why, so far, few cases of human-to-human infection had been recorded, Yuen said.

HKU conducted the joint study with Zhejiang University’s First Affiliated Hospital in Hangzhou and published the results in the Clinical Infectious Diseases journal on Tuesday. They tested 12 patients who were admitted to the intensive care unit between April 10 and 23. Half of them have died.

During post-mortem tests, stool samples collected from four of the six fatalities returned positive results for the H7N9 strain.

The rate – 67 per cent – was much higher compared with those found for human flu or H5N1 bird flu, which ranged from 5 per cent to 33 per cent, the report said.

None of the blood or urine samples from the six dead patients carried H7N9. Other tissue samples, from the lung, heart, liver, kidney and bone marrow, also tested negative.

Earlier this month, Chinese researchers said their findings indicated that the H7N9 bird flu “has not gained the ability for efficient sustained transmission from person to person”, although a father infected with the deadly virus was believed to have passed it to his daughter in Wuxi , Jiangsu .

In 2003, Hong Kong dealt with the deadly Sars outbreak, after it had first appeared on the mainland in late 2002.

At the Amoy Gardens housing estate 329 people were infected with Sars, of whom 42 died. The cause was traced to the sewage system which, because of its design, released the virus into the air when toilets were flushed.

It is not known whether H7N9 bird flu can be transmitted in the same way, but Yuen believed it was “theoretically possible”.

“The efficiency of human-to-human transmission is very poor up until now,” he said.

He stressed that the faeces of sick birds were still suspected to be the most common means by which the bird flu virus spreads.

The H7N9 virus was first identified in eastern China, with the first known human case reported in March. Thus far there have been 135 confirmed cases and 45 deaths. 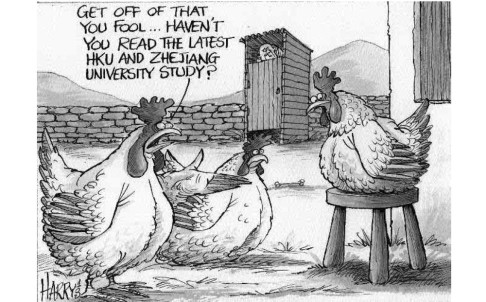