One Dead, One In Isolation After Two Cases Of Crimean-Congo Hemorrhagic Fever Confirmed In Madrid

Sep 01 2016—NEWS—200 people who came into contact with the infected patients are being checked, and some confined to their homes.

CDC map of the usual geographical distribution of the disease, and an image of the tick.

Madrid regional health authorities confirmed two cases of Crimean-Congo hemorrhagic fever had been detected in the Spanish capital, after receiving the results of tests from the National Microbiology Centre.

Regional health authorities said in a statement that it was the first home-grown, non-imported case of Crimean-Congo hemorrhagic fever in Western Europe.

A 62-year old man died on August 25 in Madrid’s Gregorio Marañón University Hospital, having been admitted first to the Infanta Leonor Hospital, close to the Vicálvaro district in the south-east of the city.

The second patient is an intensive care nurse at that first hospital who was infected by the virus whilst caring for the 62-year old man. She was moved in a special ambulance last night to the infectious disease wing of the La Paz-Carlos III Hospital, for treatment

A further 200 people who came into contact with the two infected patients are being checked, and some confined to their homes, but so far no new cases have been detected.

“Everything points to the origin of the illness in the first case being in the tick bite”, said a statement by regional health authorities: “which the patient himself referred [to a doctor] following a walk in the countryside in place in Castilla y León, and that the nurse became infected on coming into contact with his bodily fluids whilst treating him in the intensive care unit of the Infanta Leonor Hospital”.

The regional health department told The Spain Report that the town where the male patient had been for a walk in the countryside was Ávila (Castilla y León).

The nurse’s colleagues reported her symptoms to public health authorities.

According to the World Health Organisation, “Crimean-Congo haemorrhagic fever (CCHF) is a widespread disease caused by a tick-borne virus (Nairovirus) of the Bunyaviridae family” and is “endemic in Africa, the Balkans, the Middle East and Asian countries south of the 50th parallel north – the geographical limit of the principal tick vector”. 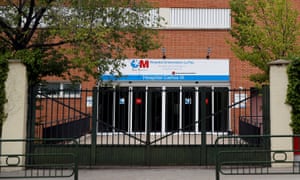 The nurse, infected by a patient who died after being bitten in Castilla-Léon, is in isolation at Madrid’s Carlos III hospital. Photograph: Andrea Comas/Reuters

Health authorities in Madrid are taking steps to contain an outbreak of Crimean-Congo haemorrhagic fever (CCHF) that has killed one man and infected a nurse who treated him.

Nearly 200 people believed to have come into contact with the two victims are now being monitored, the regional health authority said on Thursday.

CCHF, a disease endemic in Africa, the Balkans, the Middle East and some parts of Asia, is caused by a tick-borne virus and has a fatality rate of 10%-40%, according to the World Health Organisation.

The 62-year-old man, who died on 25 August in Madrid’s Gregorio Marañón hospital, is thought to have contracted the fever after being bitten by a tick while walking in the countryside in the Castilla-Léon region of Spain.

The nurse, who treated him in the intensive care unit (ICU) of a different Madrid hospital, the Infanta Leonor, has been isolated and is said to be in a stable condition.

In a statement, the health authority said: “Everything suggests that the origin of the illness in the first case is the tick bite mentioned by the patient himself … and that the nurse became infected by contact with bodily fluids while she tended him in the ICU of the Infanta Leonor.”

It said standard safety procedures had been observed as there had been no reason to suspect CCHF, given that ticks can carry a variety of diseases.

Although the fever is endemic to eastern Europe, it is sometimes imported by people who have picked it up while travelling in affected areas. According to the Spanish authorities, this is thought to be the first case contracted domestically in western Europe.