Latest figures indicate increase in the virus in some countries, as international funding for research and treatment falls 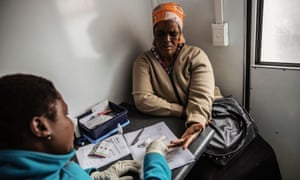 A woman gets tested for HIV in South Africa. Photograph: Gianluigi Guercia/AFP/Getty Images

Sixteen years after a groundbreaking conference shocked the world into the realisation that thousands of Africans were dying of Aids because they did not have access to life-saving drugs, campaigners and scientists meeting once again in Durban this week will warn that the progress made since 2000 is not enough to end the epidemic.

Although the argument for drugs for Africa was won and 17 million people are now on treatment that keeps the virus at bay, there are 36.7 million people living with HIV, according to UNAIDS, meaning that fewer than half of those who need the drugs are getting them. The World Health Organisation (WHO) recommends that anybody diagnosed with HIV should be put on antiretroviral drugs as soon as possible, to keep them well and because the medication prevents them infecting others.

Meanwhile, the numbers becoming infected every year, which had been dropping, have now stalled and are rising in some countries. Just under 2 million people become HIV positive every year, so the epidemic continues to grow and the cost of keeping people alive continues to rise.

There is mounting anxiety among the experts and the activists at this year’s Durban International Aids Conference that the epidemic may slip out of control once more.

The WHO is among those flagging up serious issues that could put in jeopardy the UN’s plans to end the epidemic. In a statement at the start of the week-long conference, the WHO called for new attention to prevention and warned of growing resistance to the antiretroviral drugs used to control HIV, which could mean that newer, more expensive versions will be needed in the developing world.

“The enormous progress on HIV, particularly on treatment, is one of the big public health success stories of the century,” said Dr Margaret Chan, director general of the WHO. “But this is no time for complacency. If the world is to achieve its goal of ending Aids by 2030, it must rapidly expand and intensify its efforts.”

Money is a growing concern. A report from the Kaiser Family Foundation in the US and UNAIDS this weekend said that funding from donor governments had fallen last year for the first time in five years from $8.6bn in 2014 to $7.5bn.

“2015 marked a drop in donor funding for HIV,” said Jen Kates, director of global health and HIV policy at the Kaiser Family Foundation. “Donors faced many competing funding demands, including humanitarian emergencies and the refugee crisis, all against a backdrop of fiscal austerity in a number of countries. Looking ahead, donor funding for HIV remains uncertain as leading donors face changes in political leadership and the world is still digesting the effects of Brexit.”

Luiz Loures, the UNAIDS deputy executive director, said the decline in funding was worrying. “Countries still need urgent support over the next few years to fast-track their responses to HIV, enabling them to end the Aids epidemic by 2030 and save millions of lives. Diverting resources from the HIV response now will mean much greater human and financial costs over the long term.”

In recent years, there have been many optimistic pronouncements about innovations that may help end the pandemic, from circumcision to microbicides that allow women to protect themselves from HIV to drugs used for treatment that also prevent infection.

The results of further studies showing that these things can work will be presented at Durban. But the major hurdle may be making them routinely available – particularly in the case of drugs that can be taken by people without HIV to protect themselves.

HIV scientists are focusing on research to bring closer a “cure” for HIV infection, which is usually interpreted as long-term remission from the effects of the virus rather than its elimination. The work has been inspired and encouraged by a few remarkable cases, including the Berlin patient who had a bone marrow transplant that eradicated all trace of HIV in his body. More recently there was the Mississippi baby who was given intensive treatment with antiretroviral drugs shortly after she was born with HIV and remained well without drugs for two years. In 2014, she was found to have detectable virus in her bloodstream once again.

The conference, which takes place in a different country every two years, will not hear of any major breakthrough on the road to a cure in Durban, but scientists say their increasing understanding of the way the virus can hide in the body and its relationship with the immune system encourages them to believe that it will eventually happen.