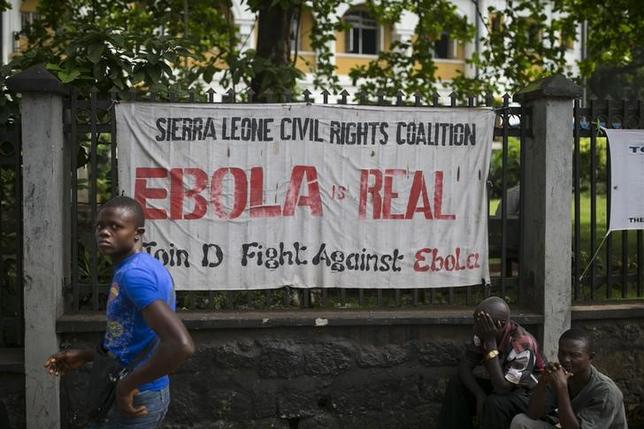 A man walks past a banner about Ebola in Freetown, Sierra Leone, December 16, 2014.
REUTERS/BAZ RATNERIsolated flare-ups of Ebola may point to a higher risk of transmission via the semen of male survivors than previously thought, undermining hopes of ending West Africa’s deadly outbreak by the end of the year.

The World Health Organization’s advice is that all male survivors should be tested three months after the onset of symptoms and then monthly until they know they have no risk of passing on the virus through their semen, Bruce Aylward, head of the WHO’s Ebola response, told a news conference.

But a forthcoming study in the New England Journal of Medicine, based on around 200 survivors, found that around half still had traces of the virus in their semen after six months, a clinician familiar with the study told Reuters.

“The old advice of three months is no longer good,” the clinician said. “The number of people with persistent virus in their semen is much greater than expected.”

“It’s not the sex that is dangerous, it’s the semen that is dangerous,” said Aylward, who mentioned the study during a news conference but did not give details. “How people actually get exposed, in soiled linens or whatever, is not clear.”

Transmission through semen may explain why a few cases continue to occur even though the outbreak has been almost completely eradicated by an intense international effort, recently bolstered by the deployment of a trial vaccine in Guinea and Sierra Leone.

“This virus and this outbreak in particular has a nasty sting in the tail,” Aylward said. “It’s not finished, by a long shot.”

The latest flare-up, in a village on the northern border of Sierra Leone, followed the death of a 67-year-old woman late last month, 50 days after the previous confirmed case in the region. Transmission chains are considered to have been broken after 42 days with no new infections.

However, Aylward said that sexual transmission was “obviously not a huge risk, because if it were we would have seen a lot more in the areas that were hardest hit at the beginning of this outbreak.”